Without looking it up first, I’d say that a museum is a place where certain stories called and/or loosely categorized under “history” are told and, in service of that, where unique and/or expensive Things are stored and also displayed for posterity as well as in the service of some sort of tacitly agreed-upon although at times contentious and frequently negotiated collective memory.  Whatever “collective memory” is and way, much more frequently then you may think.

(The above has been edited only for spelling, punctuation and grammar.  Trust me.)

Second, according to a source with some import and authority in the defining of The Things – the dictionary[1] – a museum is:

: a building in which objects of historical, scientific, artistic, or cultural interest are stored and exhibited;[2]

: an institution devoted to the procurement, care, study, and display of objects of lasting interest or value;[3]

: a girl that’s nice to look at, but impossible to get remotely intimate with.[4]

So even there we find but varying degrees of definition.

Museums at best, I think, purport certainty, the really successful kind that withstands change until and unless there is cause for otherwise.  The evidence must, of course, be extremely compelling.

What I do know of museums with some certainty is that museums have to be a kind of sexy now, with all manner of hands-on and stimulations and interactivities and augmented realities.

It is being thought provoking! It is juxtaposing narratives!  It is new! and exciting! specimens as you’ve never experienced them before!!!

It’s not just a matter of hype matching experience. Hype is in many ways part of the experience itself. Enmeshed.

Some find this varying sexiness innovative and fresh; some find it troubling in the abstract; some find it downright bleak.  Others seem resigned to the whole affair as something that is happening anyway and is, granted, not without its more interesting aspects.  Writing of the collections of the lavish Natural History Museum in London, England, Richard Fortey muses rather primly that:

A museum is a place where the visitor can come to examine the evidence, as well as to be diverted. Before the exhibitions stated to tell stories, that was one of the main functions of a museum, and the evidence was laid out in ranks.  There are still galleries in the Natural History Museum displaying minerals, the objects themselves  – unadorned but for labels – a kind of museum of a museum, preserved in aspic from the days of such systematic rather than dramatic exhibits. Few people now find their way to these galleries (2008: 7).

Things were certainly bleak for the Banff Park Museum in Banff, Alberta, late into the 1950s, when the museum – whose neglect really began in 1932 when its curator, Norman Sanson, retired and there was no one to replace him – faced not only imminent closure but final closure by way of total demolishment.  The place, with its staring heads and dusty warblers, had become outdated, and a firetrap besides.

Fortunately, prominent citizens, as they are wont to do, objected to the closure and a plan was devised to save the museum.  But somewhere along the way, the BPM – centrally located and built in 1903 after Banff’s first natural history museum became too crowded and remained too distant  – went beyond restoration. In fact, it transcended it.  Or maybe the word is “transgressed”?

You don’t have to take my word on this one:

The Banff Park Museum is of national historic significance because this museum of museums developed by Norman Bethune Sanson reflects an early approach to the interpretation of natural history in Canada and because of the architectural style and detailing so characteristic of early federal buildings in the Park (Parks Canada Pamphlet, emphasis original).

In other words: it is the display of the displays that is on display:

This unique museum features remarkable displays of wildlife, but it is the fashion in which they are displayed which is of real interest here. Housed in a 1903 log cabin, the collection of specimens reflects an approach taken by naturalists at the beginning of the 20th century (emphasis mine).[5]

The instant your foot crosses the threshold of the Banff Park Museum’s carefully preserved yet wonderfully restored doors, you’re in two places at once, twice: the museum and the museum of the museum.

Come one come all.

Strolling leisurely around the main hall and up the solid staircase with just that little bit of give, railings slightly sticky with other people’s fingerprints, amid glass cabinets of beasts great and small and others frozen in free-range, you really do appreciate how the BPM’s lantern-like windows and open space allow natural light to infuse entire building – itself beset with overhanging eaves, carved brackets and made of wood so deep and rich as to appear soft and golden even in the darker reaches of the museum – all the while catching sight of a few unassuming displays of newspaper clippings, blueprints and original designs that serve as gentle reassurance that (don’t worry!) you’re not actually, really, wholly there.

Removed from the moment, you are free to enjoy from a comfortable distance.

“Help us protect this National Historic Site, by not leaning on the historic exhibit cases’ fragile rolled glass panes. They are original and irreplaceable artifacts too!” (Parks Canada Pamphlet).

Because people are funny with taxidermy – the collection of which remains of vital importance to the “interpretation of national history” (i.e. bodies posed and poised, stacked and patterned, and sometimes bones too) – especially if they perceive that they are not getting their money’s worth in terms of learning or fun or both or whatever.

At issue is the matter of what people get out of taxidermy, really, and what, exactly, and beyond the wrenchingly obvious, taxidermy is.

Taxidermy rebuilds animals with human longing. No longer purely animal, nor fully human-made, taxidermy is infinitely more than the sum of its parts. Technically speaking, the tanned skin of an animal stretched over an armature and adorned with glass eyes is really nothing more than a fancy species of upholstery. But encounters with taxidermy are as fundamentally different from encounters with leather sofas as they are from encounters with living animals, photographs of animals, or videos of animals. Taxidermy isn’t a sculpture or interpretation of an animal. It still is the animal but forever blurred with human desire (2012).

Taxidermy is a subculture (emphasis obvious), and it is at once delightful and distressing.  It requires order, after a fashion, and for that very reason seems to elude it at every turn.  It is certainly, as Poliquin states above and if nothing else, imposing. 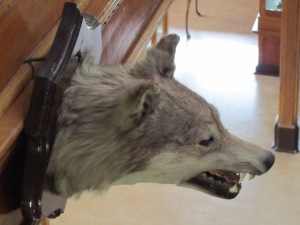 “Predators were once considered mean and menacing, and mounted to look fearsome. The Museum’s 1914 handbook described predators like the wolf as ‘cunning and merciless’ while the white-tailed deer were ‘happy and carefree'” (Parks Canada Pamphlet).

So imagine how it is with old taxidermy, in which specimens were killed, stretched and sculpted in an abundance even we in our own prevalent excesses would gawk at, and the animals collected were made to be exaggeratingly vicious or disturbingly coy,[7] according to the sensibilities of the time (not that those have that changed much), and are silent and still and kind of…lumpy, besides.

The beaver seems to really need the stump, ‘ere he risk falling over completely.

A museum of a museum, the Banff Park Museum offers a lot with the one hand without having to offer very much with the other.  Even the interactive stations on the main floor (set up, I suspect, mostly for children) – “good/OK touch stations” of various animal parts (a skull, a few antlers, some mattered fur and greasy animal hair, one great singular curl from a bighorn sheep) – seem almost an afterthought thrown alongside the main event: the museum’s museum of the museum.

Clever, very clever.  Ingenious even, considering that the BPM is pretty much doing what museums do anyway, but with a kind of mindful sleight-of-hand that is, well, hip.

It is what is happening.

So, is that it then for the Banff Park Museum?  Will it be like this, for always?  For forever? There doesn’t seem to be anywhere left to go.

What is forever anyway?

It’s an eternity so long as it lasts, to be sure.

[1] Dictionaries themselves are, I know, highly political and often contentious sources of knowledge.  But we work with what we have and go from there.  We do what we can.

[6] An archaeologist working out of the National Museum in Ottawa, Harlan Smith designed many of the displays at the Banff Park Museum, the best and most immediate example of which is the impressive mountain goat and bighorn sheep “habitat” that greets visitors on the main floor.

[7] With all the connotations of “alluring”, “attractive” and “tempting” therein.