I am always a little apprehensive about “coming home” to my parents’ house – a place where I am a little more than a guest, a little less than a resident.

But even now, as I try to figure out Life in The Big City, I come home and it only takes a beat before we get back into the rhythm of Things.

“I left him with Stephen.”

“I went shopping with your Aunts.  In Toronto.  I got you keychain.”

It, um, matches my eyes. 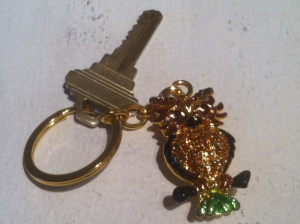 Do I really only have the one key?

“Hey! What are you making?”

“Lots of family, lots of soup.”

“Before you leave again, I make springrolls!  Unless your mom says no.  Then I make MANY MANY SPRINGROLLS.  Ha, ha!  OH!  You remember Mom’s cousin?  Your aunt?  The one that used to live with us?”

“Remember?  At the old house?”

“She died!  We go to funeral this weekend.”

And then there was the time…

“I left him with Stephen.  Dogs aren’t allowed on the bus, Mom.”

“Not even you pay extra?”

“What is ant-polly-gee?  You done study that yet?  You have job?  When you get married?  You getting too old not to have babies. You pay too much for apartment, why not use money for mortgage instead?  I need you write letter for me and phone these people and pick up these things.  Next time, try pay extra. How you spell R-E-C-I-E-P-T?  Your dad made too much soup last time!  Can you vacuum downstairs before you leave and go to business school?”

“I DID NOT MAKE TOO MUCH SOUP!”

You can, indeed, go home again.  It is a small comfort surrounded by very big inconveniences.

And swimming in noodle soup. 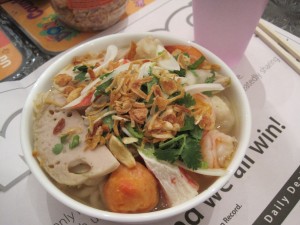 When consolation is delicious!