I get that I make mistakes.  But when they mock me so, I have to wonder what it is I’m actually supposed to be learning from them.

I was out on the town with some friends the other night – Peeps, really (yes, I have them) – having tacos.  It was live music night at the place we were at and the show was fine as far as live music at places that serve tacos go.

There was no headliner.  No main act.  Just a string of performers, giving their best.  Or at best giving their all.

During a lull in the music, one performer’s friend came to the tables with a jar (big, plastic, thoughtfully crude) to hit up the audience for “donations”.

(Though, most of us had come as and probably would have preferred to have remained, simply, diners).

As she made the rounds, we found ourselves confronted by the nagging expectation that seeped out from the open maw of the jar.  None of us had cash. But I did have a few coins in my pocket.  My “subway insurance fund” in case I come up short for fare, which has never happened.

(The math makes no sense).

She arrived, jar thrust out at arm’s length, right under my nose.  I reached into my pocket and pulled out my bounty.

Rubbing them together, sadly, does not produce further quarters.

“That’s okay!  We’re talking about musicians here!  Anything you have, they’ll take.”

The performer, the one for whom the jar was appreciative charity (the jar was for the “musicians” but she had been the only one that played at that point), had brought her parents and friends with her to the show.  And though she had “been at it” for three years, I couldn’t help but notice the untroubled ease – the unbothered safety – from which she played her set.

The isolated enthusiasm of her entourage.

The crisp bills they stuffed into the jar before it was released to the general populace.

The perfect crease in her father’s kakis.

I dropped one of the quarters in the jar, palmed the other.

Half-human, half-Betazoid, and ultimately, "Deanna Troi-Riker". Everything and nothing, in the end.

What the HELL, Deanna Troi?  There’s so much I can’t get past to get to you.

Being ship’s counselor also makes you a lieutenant commander?  Or is it the other way around?  Or it is both or is it neither – and neither and both – because it really doesn’t matter if it makes any sense at all?

Why are you on the bridge again?  To tell if hostile beings are being hostile.  To see if liars are truly lying.  To dazzle up the right side of the screen.

I feel like there should be a Lifetime filter specifically on you every time you are there.

Not that you don’t have a lot to cry about, mind.

How many times did aliens take control of your mind/body during fits of poor writing and bad allegory?  At least twice that I know of on TNG and once by Mini Me Picard.

That guy.  That guy had problems.

Everybody likes your mom better than you.  You’re in the background until she leaves again.

Deanna Troi, you were almost Tashsa Yar, but the two of you ended up switching places.  She went on to deliver some impressive progeny (herself!), and you gave birth to an ungrateful brat who floated off into space.

I mean, you try to do your own thing, try not to get in the way, pitch in where you can and you still can’t make a proper go at it.

You step onto the bridge (like always) and the new guy in charge tells you to change your damn shirt (inappropriate).

You try to help out a friend and he turns you into a cake and eats you.

You’re just chillin’ in the tub and some jacked-up asshole comes along and bites you in the fucking neck.

That would do it.

I would lose it, Deanna Troi.  I would do whatever, too, if I had to endure all that.

The Greatest Story I Will Ever Have to Tell

It was 1989 and I was 7 years old.  My grandmother had died and at that moment, I was standing in a graveyard on a cold December afternoon.

I was with my family.  There were a lot of us: my parents, siblings, aunts and uncles and a smattering of cousins.  We took over the place.  We were everywhere.  Someone bought sandwiches and pop.

At 7, my only experience with death had been the loss of a pet turtle, the untimely demise of pet bullfrog (eaten by another pet turtle), and the mass death of an entire tank of bloated fish.   It was an unimpressive resume.  And since my parents simply replaced the turtle with a new turtle (admittedly with Murder Turtle), re-filled the tank with prettier fish, and gave me a Pound Puppy toy in lieu of a new frog, I really didn’t learn anything about death except, perhaps, that things die because it was time to replace them with similar or better things. 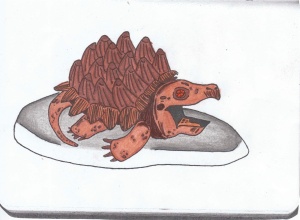 Its mouth is open because it's feeding on souls.

The graveyard was on the edge of a small town that was populated by Mennonites and horses.  My grandma had died a month earlier, but it was only now that we could all gather to see her gravestone.

To enter the graveyard, you had to open these huge, black wrought iron gates and close them upon exit.   Since the entire place was on a very high and craggily hill, only three sides were fenced in by brick and iron while the forth, which was the edge of a sheer drop, simply dropped.

It was there that I stood in the waning light, away from everyone else, ensconced in a green-and-orange snowsuit.

The adults were huddled over Grandma’s gravestone, remarking on its craftsmanship and doing a thorough spell-check.  My cousins were running wild with my siblings in a rousing game of “Grave Tag”.  A couple of the younger kids were beating each other with sticks.  There were sandwiches everywhere.

I was staring down the hill at the river down below.  It was beginning to freeze over and I was wondering what happened to all the fish in the winter.  It seemed like such a chore, living in the water as they did.

I turned away from the edge of the hill, intent on rejoining the clan.

And that’s when I saw them.

Three sets.  One for each of the mini vans and one for my uncle’s cheesy cherry-red Firebird.[1]

The snowsuit constrained my movement such that I could go forward only by lifting one leg up high in order to bring it down, hard, into the snow before lifting up the other leg and repeating the process.  In my desperate haste, I fell and kept falling into the snow, leaving the bodies of desperate, puffy snow angles all over the graveyard.

It was a massacre of one.

I tried to yell ahead to prevent my relatives from abandoning me IN A GRAVEYARD, but stopped after only a few short cries when I realized that my screams would simply not be heard.  Everybody was already in their cars, and I knew my parents were blasting that special brand of Vietnamese pop music that was the soundtrack to my childhood.

The engine starts and the music flows.

By the time I made it to the tree in the middle of the cemetery, it was too late. I stared up after my family only to see the taillights twinkle in the distance and then disappear into the thickening darkness.

Unsure of what to do, I stood there for a moment by a cluster of eroding gravestones and looked them over to find among them the bright shining stone of my dead Grandma.

When my teacher, Mrs. Glue (was that really her name?) came to the funeral home to pay her respects, she had taken me aside to tell me how sorry she was that my grandma had “passed away”; had whispered it like she was letting me in on an open secret.  But English euphemisms were not yet embedded in my repertoire of Things to Say and I could only exchange “chết” for “dead”.

“My grandma is over there.  She’s dead.”

Now I know better (or more, in any case).  But then it was about clarity.

I realized that my only recourse was to go to one of the nearby houses for help.

By now it was getting really cold – night cold – just as my body heat began melting the snow that had invaded my suit during my many, many falls.  The melt mixed in with my sweat and, in addition to the fiery chill that burned me down my face and neck, all the intermingling wetness alerted me to the fact that I very much had to pee.

I trudged toward the gate as quickly as I could and fell twice in the process, leaving two more sloppy snow angels in my wake.  It was locked from the outside, and I was too short to reach through the bars to lift the handle. There was a wedge of empty space between the bottom of the gate and the top of the ground, but there was also wadded, packed snow in between.  To get through, I had to get down on my belly and use my hands as little shovels.

I started to dig, dig, dig and p—u—s—h at the same time, squeezing my body through the gate at I went.  It was like trying to give birth to myself, but the pain and humiliation this time were mine alone.

…I was totally, fully and perfectly stuck.

Pinned down in the middle, I kicked my legs and swung my arms up and down in an attempt to “swim” out of my predicament.  When that didn’t work, I tried for the “alligator death roll” to freedom, but I could only manage to sway heavily from side to side.  “The Superman”, in which I thrust first one arm and then the other in front of me in the desperate attempt to propel myself forward, only succeeded in reminding me twenty years later that I was an incredibility stupid, sad little girl. 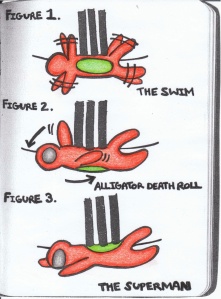 Excelling at total failure has always been a gift of mine.

Exhausted and still very much stuck, I succumbed to my fate.  I wondered idly what my parents were going to replace me with to fill the void for my siblings.

Fuck it.  They were probably just going to take them to MacDonald’s.

We got a lot of MacDonald’s when Grandma died.

I heard it.  Gravel and snow being crushed under the tires of our rattling mini van.  And the next thing I heard after the crunching of the snow from my mother’s footsteps was her sharp gasp upon finding me splayed out AND pinned on the ground.  I lifted myself as far up on my arms as I could go and let out a furious “WHHHHHHY???” just she screamed “OHMYGOD!!!”

“YOU LEFT ME IN THE GRAVEYARD!”/“WE THOUGHT YOU WERE IN THE BACK!”

She dug me out, with my father’s help.  We walked towards the car in silence.

As we drove away from the graveyard, my siblings bug-eyed and speechless in the back, my mom started laughing for release, but stopped when my dad turned up the pop music to drown it, all of it, out.  They still cringe whenever I bring up “the happening” at the graveyard.

How difficult the whole experience had been, after all.

You know.  For them.

[2] Asian Left Out Near Eternity.