I like taking the subway to get to Other Places because I can do Other Things while I’m at it.  It’s like a kind of wondrous, effortless multitasking. 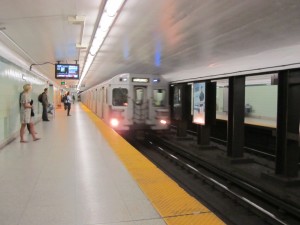 Game on, game on.

(Finally!  A chance to enjoy MMMBop, on repeat, without distraction).

(And in plain sight of a Society at Large that is none the wiser.  HA!).

(That woman looks drained and downtrodden; she needs a break.  That man is robust, yet unfocussed, and just a little bit glib; he has had too many breaks).

(Everywhere I look pants are getting both tighter and bagger.  It’s like one is compensating for the other but I’m not sure which is doing which).

(Did I just indadvertedly make eye contact with that old lady?  Shit.  Look away!  No, wait.  Don’t look away!  PRETEND YOU’RE ASLEEP AND DON’T KNOW ENGLISH).

Sometimes, I just, kind of, you know…space out and go from there. 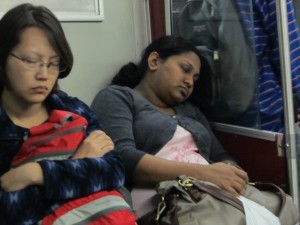 Mostly, though, I read.

But it is not without its perils.

After all, nobody wants to LOSE at reading.  It’s all a matter of knowing when to pick your battles.

At a Tim Horton’s?  Go ahead, pull out that brand new copy of Jean M. Auel’s The Land of the Painted Caves.  Read it over timbits and half-eaten crullers and lowered expectations.  “Ooo” and “ahhh” whenever the mood strikes your fancy.  Laugh your head off.  Or not.  Who cares?  WHO CARES??

At a Starbucks?  Best then to go with that worn copy of Nietzsche’s Thus Spoke Zarathustra that you picked up at Goodwill for just the occasion.  Be sure to smile indulgently at the page every now and then, and to nod your loving approval to a brilliance not unlike your own.  Chuckle, a little, to show your engagement with the DISCOURSE.

…On the subway, reading is an art.  Of war.  You have to know the terrain you’re on that particular day and adjust to the conditions and – this is critical – to know to withdraw when you have to.  It’s not like listening to Rock N’ Roll Razorblade, or reading from a Kinkle or Kooboo or whatever the hell, which you can do with the immunity of anonymity.

iPad Dude! Damn you and your impunity from my scrutiny!

Because maybe today is a Dan Brown kind of day.  Sheep!  I shall raise the stakes with my rare edition of hitherto unpublished Mark Twain manuscripts!

But what if The Autobiography of Mark Twain is the Name of the Game?  Why, then, I shall counter with the Collected Works of the Emmanuel de Mure Volstein!  It doesn’t matter that he doesn’t exist; even if he did, you still wouldn’t have heard of him!

The Help.  The HELL?  HA! Allow me to retort with The Hunt for Red October, because it’s the better movie.

Twilight?  You’re better off with the movies in the way that people are better off trapped inside burning houses than under churning seas.

No surprises in the end, but least you’re not wet.

Shakespeare?  SHAKESPEARE! Shit…Oh shit.  How am I supposed to know if you’re reading in earnest or with ironic detachment?  Is there a book report due or a play in production?  Is Kenneth Branagh up to something??  Too many variables here.  Best to rock myself gently to the soothing melodies of Middle of Nowhere and live to fight another day.

(Plant a seed, plant a flower, plant a rose/You can plant any one of those/Keep planting to find out which one grows/It’s a secret no one knows…)

You may ask: must I live this way, constantly on edge?

Because sometimes you have to lose to win.

Because sometimes the content of the book isn’t as interesting as who’s holding it by the covers.

Because sometimes Tenuous Something is better than Ample Nothing.

…Sometimes I think that Things would be easier if I just read whatever I wanted whenever I wanted.

But the world doesn’t work that way, and it is in moments like these that I realize that I just can’t betray the standards I have set for others to impose on me.

It is a hard Thing, living for others; entering the combat zone weary, battle scarred, knowing that in my heart of hearts, my love resides elsewhere.

This book has everything.

But I shall persevere.